The late, great Constance Howard wrote a four-part history of Embroidery in the Twentieth  Century, but she finished it well before the Millennium (in the 1980s).  We are all greatly indebted to her for this, as for much else.  She included  Rebecca Crompton, Elizabeth Grace Thompson and Dorothy Benson in the early volumes covering the 1930s, as  they had great influence on creative embroidery rather than the more formal, traditional styles as exhibited at that time by the Royal School of Needlework, and womens’ magazines. 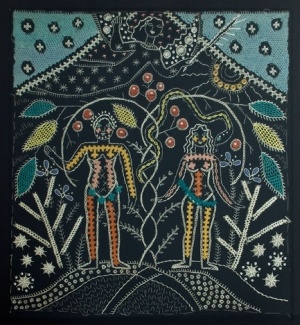 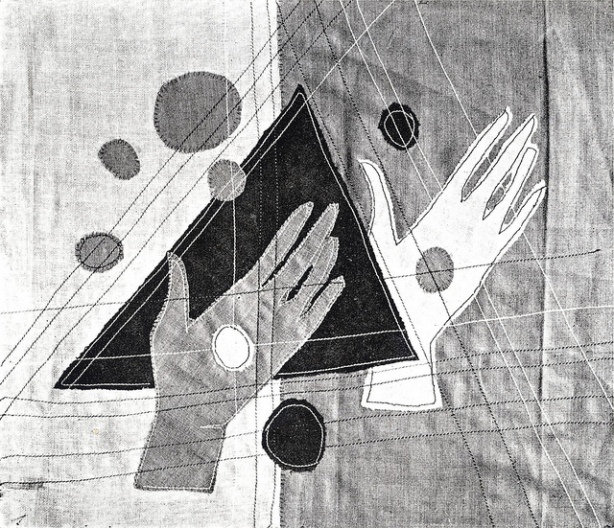 I made a copy of this myself for C&G Pt II, but this is a photo of the original

(It appears to have both hand and machine stitching on it, and I certainly used both.  NB. It looks as though a different colour was used in the bobbin.) 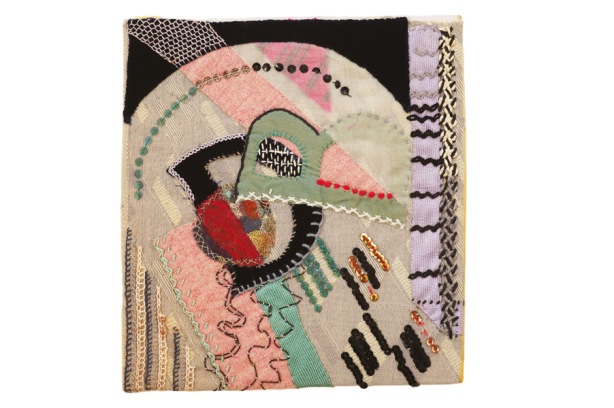 Rebecca Crompton was Head of Textiles at Croydon Art School, Elizabeth Grace Thompson was one of her students and Dorothy Benson worked for the Singer Sewing Machine Company, and was one of the first exponents of Machine Embroidery as such.  She actually worked some of Rebecca Crompton’s designs on her Singer and wrote several books on Machine Embroidery.  (They are out of print and selling for £70 plus on the net!!!)  Because we are looking at a very niche subject here, in the Great Scheme of Things, and I cannot quickly or easily obtain any of the contemporary reference books (or cheaply!) I cannot verify whether Dorothy Benson had a drop feed or swing needle mechanism on her Singer.  Because she was working for them, I would guess that she had the most up-to-date models at her disposal, so may have done if they had developed that far.  (My mother had a hand-operated bog standard Singer in the 1950s on which I, and later my daughters, learnt to use a machine and it had neither). 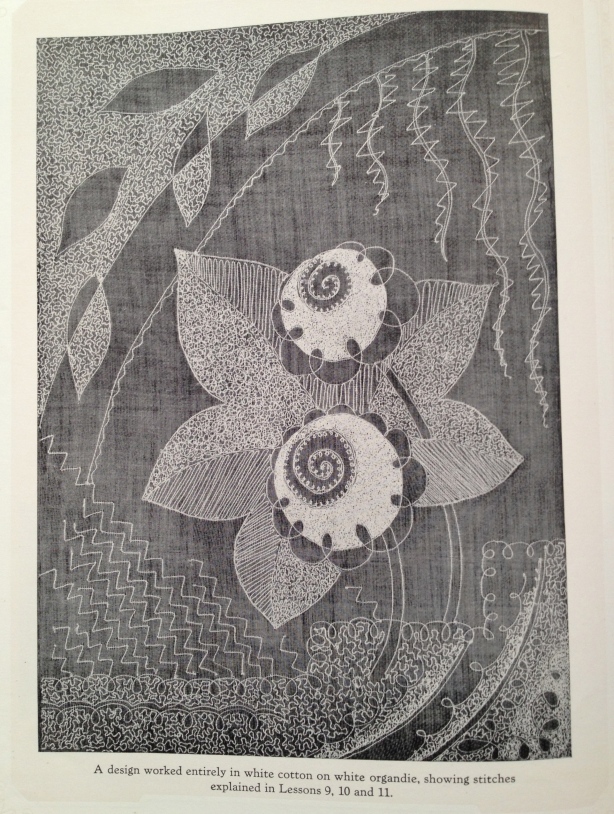 Although there is no attribution, this design would fit alongside other pieces by Rebecca Crompton.  The machine used surely had a drop-feed as it would be practically impossible to work vermicelli stitch without.  I’m also assuming it was electric.

Lilian Dring was working during this period, as was Constance Howard herself.  During the war there was great emphasis on recycling, although it wasn’t called that, and Lilian’s work ‘Parable 1’ used a lot of recycled fabric.  After the war, she made ‘Parable 2’, which included fur from her kettle, apparently.

She and other ladies from Twickenham worked a panel which was exhibited at the Festival of Britain, and this too contains re-used fabrics.

St Mark’s Church, Surbiton, was bombed during the war and rebuilt in the early 1960s.  Lilian made a number of items of furnishing for the new church, including a Frontal for the Childrens’ Altar.  (I recently acquired some of the preliminary sketches for this and other items). 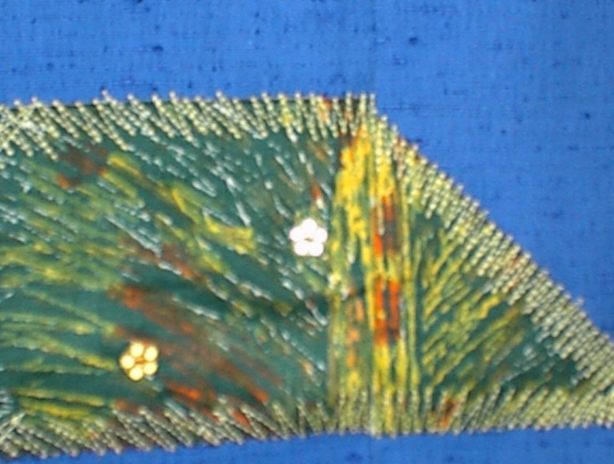 I think Lilian was using her mother’s 1912 Frister and Rossman hand-operated machine as the edges appear to be straight machining. 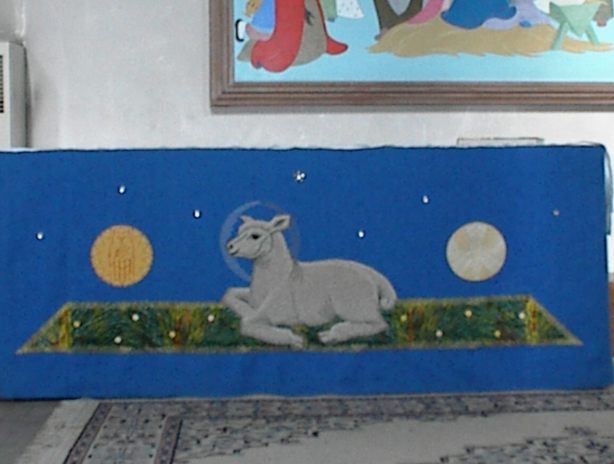 Beryl Dean, another legend in her own lifetime, also had an input into St. Mark’s new furnishings: she was Head of Textiles at Hammersmith College at the time.  Two of her students, Deanna Bailey and Audrey Tucker, took on the commission for a Red High Altar Frontal, under Beryl’s supervision.  This piece has always divided the congregation, I love it, some hate it, one previous vicar (much loved, still selling home-made bread at the Christmas Fair) still refers to it as the Vultures.  It is wholly of its time. 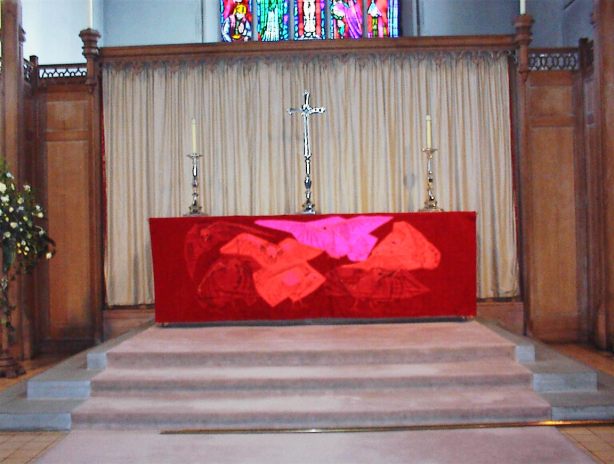 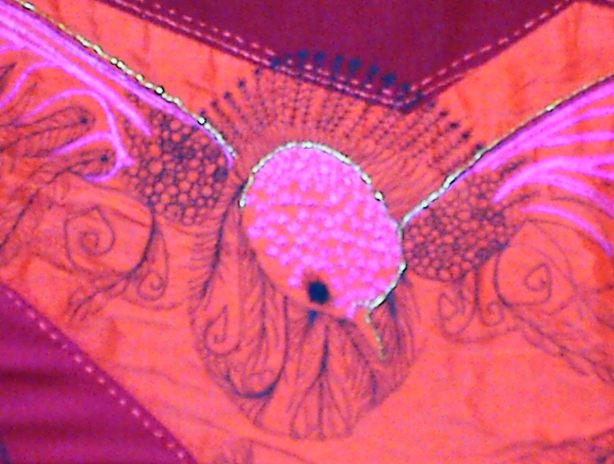 When I began to learn about embroidered textiles, I always wondered if this was actually Beryl Dean’s work.  It seems I wasn’t that far wrong.        (Photos courtesy of Sandra Hurll)

Swinging London left its mark on everywhere and everything else, so new ideas were well received, but using up leftovers was still important, and in some cases, could be quite shocking.  The first Art of the Stitch exhibition I ever attended was the last one at the Commonwealth Institute in Kensington.  It included work by Julia Caprara and Michael Brennand Wood.  To me, at that time, embroidery was cloth and stitch – probably by hand.  Her pieces included black plastic sacks, and his appeared to be a polymer cast of what I later discovered was needlelace or something similar.  Quite an eye-opener!

Then there was Paddy Killer: I love her work. 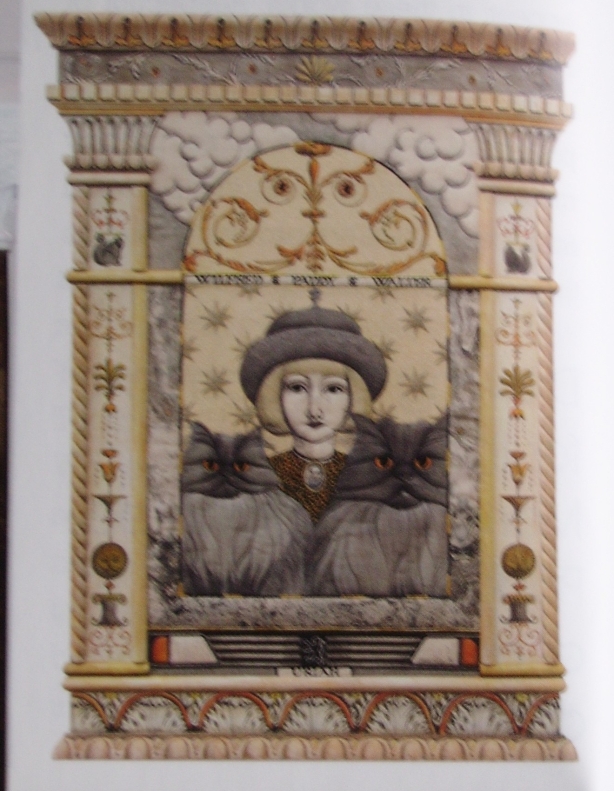 One Peugeot, two Persians and Paddy 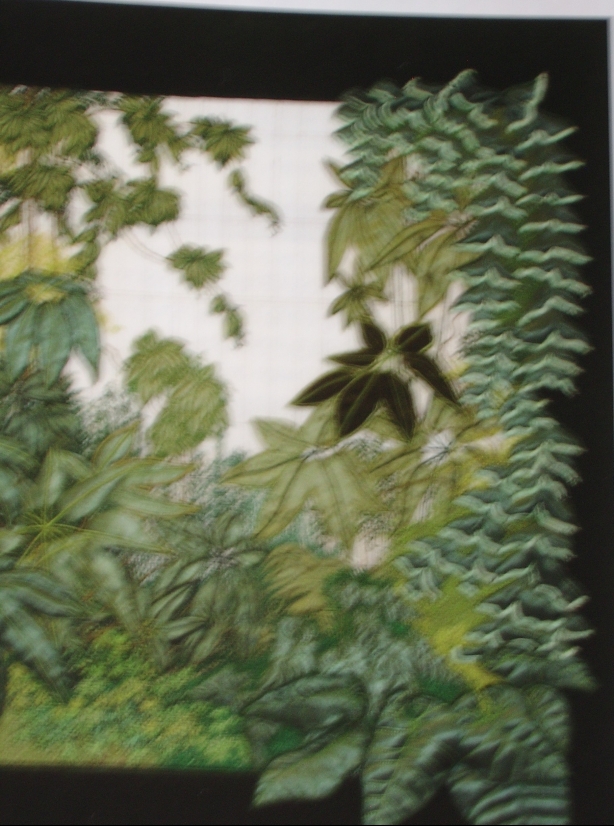 These are not very good photos, they are from The World of Embroidery , March 1999.  The one I really like is the portrait of Mary II, but I couldn’t find a large enough example to photograph.  It is the clarity and precision of Paddy’s work which I love

Audrey Walker was exhibiting in The Art of the Stitch at the Barbican alongside Clyde Olliver and his stitched slate slabs.  (I first saw Cindy Hickok’s work at the same time: see Module 3, Chapter 5). 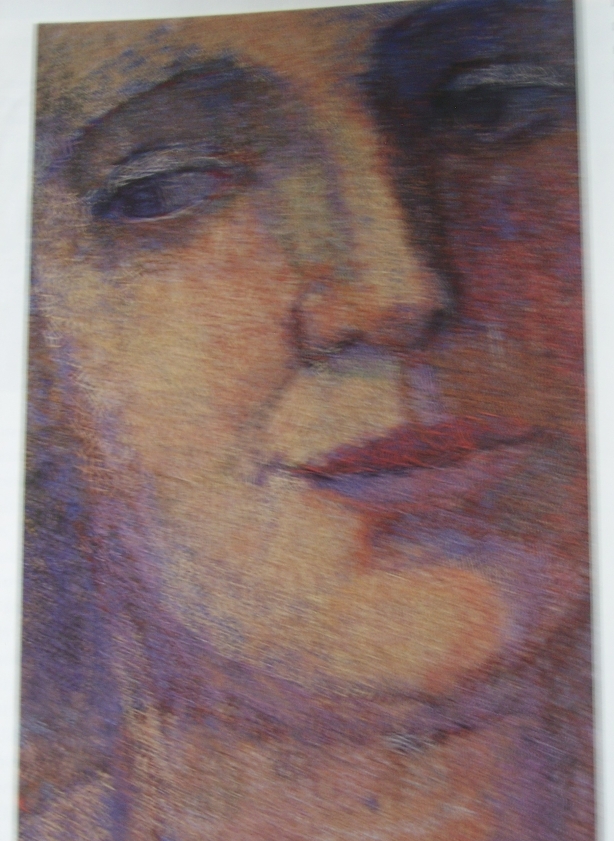 This not much better, but the book: ‘An Embroiderer’s Eye’ (Diana Springall) has examples of the work of both of them, as well as other contemporary stitchers.  I understand that these heads are not completely machined, but as far as I could tell, the top layers were random zigzag.  Amazing.

After the millennium, in 2003, I acquired a granddaughter: the Ffabulous Ffion.  Her gift to me this Christmas was a copy of The textile Book by Colin Gale & Jasbir Kaur. (Berg, Oxford/New York,  2002).  Chapter 6 is entitled The Craftsperson.  I was originally a librarian by profession, and we don’t write in books.  This chapter is heavily underlined and asterisked as it tackles the thorny subject of ‘high art’ amongst others.  (My mother, who was a good watercolour artist and a less good but more enthusiastic oil painter, was bitterly insulted when I put a higher price on a piece of my work (and sold it) than she would ask for and sell hers.  She liked what I did, ‘but it’s only sewing’.)

The first sentence and a half: Essentially and absolutely a craftsperson is a maker.  Craft textiles, as a distinct category, are commonly perceived as multi-media, exploring the inherent qualities of different textile materials, …

And so we come to Tyvec (hailed by the Library profession as a wonder product for conserving old papers, yeah, waterproof OK, but put it near heat?), spunbondeds like Lutrador, Bondaweb, Suedfx, all the watersolubles (Cindy Hickok), Angelina, silk carrier rods and cocoons, plastics (Julia Caprara), polymers, things like Expandaprint and sweetie papers.  Lutrador was originally used in car manufacture to line seat covers, before the embroiderers got their hands on it.  Wendy Cotterill (Spunbonded textile & stitch: Lutrador, Evolon and other distressables) made a beautiful machine embroidered bodice out of Lutrador, the type of item now required for ‘A’ Level Textiles.

Then there’s Alysn Midgelow-Marsden machine stitching metal shim, and Lynda Monk and Maggie Grey using everything including the kitchen sink to create unimaginable results – well, unimaginable 30 years ago.  But we didn’t know about Global Warming then, and that plastics and other polymers and chemically produced materials never decay.  These new materials are fabulous, and I love the imagination of the embroiderers using them, often with machines, but should we be considering what we do in conjunction with the health of our planet and its inhabitants, and going back to oldfashioned fabric and thread?